The Biggest Outdoor Concerts in History

When it comes to historic outdoor concerts, some have been so big that attendees in the back are there more to enjoy the light shows, fireworks and fun crowd experience than the musical performance itself. The following are the largest outdoor concert events in history.

A New Year’s celebration featuring Rod Stewart attracted the largest concert crowd in history, with 4.2 millions attendees. The beach venue in Rio de Janeiro in Brazil was the perfect place for people to lounge under the stars, enjoy hanging out in marquees, or dance the night away while listening to the music play.

The second and third largest outdoor concerts both feature Jean Michel Jarre. The first one, in Moscow, was a celebration of the city’s 850th anniversary and attracted 3.5 million people. Before that, he performed in Paris to celebrate the 200th anniversary of the French Revolution, attracting a crowd of around 2.5 million.

The Philharmonic concert that took place in Central Park was a celebration of the rededication of the Statue of Liberty and attracted 800,000 people, which was a record for the attendance of a classical concert.

Central Park was bursting with concertgoers again in 1997 to watch Garth Brooks perform classics like “Friends in Low Places” and “The Dance”. Over 750,000 cowboy hat-clad people showed up to listen to the famous crooner.

Steve Wozniak’s US Festival in California, 1983

Steve Wozniak’s US Festival was a cultural festival sponsored by one of the co-founders of Apple Computers, Steve Wozniak. This famous concert drew a crowd of 670,000 to California, with high-profile performers such as Motley Crue, U2 and David Bowie.

More than 600,000 music lovers of the ‘70s descended on Watkins Glen in New York (a Grand Prix auto circuit) to listen to bands like The Grateful Dead and the Allman Brothers.

The Isle of Wight Festival drew a crowd of 600,000 people, making it the largest concert ever held in the UK. It is also famous for being the last time Jimi Hendrix performed, but also featured bands like The Who, The Doors and Leonard Cohen.

The second reunion concert for Simon & Garfunkel was held in Central Park and was free for the 500,000-odd people that showed up.

In the lead-up to this benefit concert that drew more than 450,000 people, SARS had been running rampant in both Asia and Toronto. The Rolling Stones, AC/DC and Justin Timberlake were just some of the artists that supported the cause with their performances, and in the meantime, concertgoers could check out a dedicated exhibition booth to learn more about the deadly disease.

The Woodstock music festival was the pop culture event of that decade that had a huge influence on both American music and culture. Held on a 600-acre dairy farm outside the small town of Bethel, Woodstock attracted legendary artists like Jimi Hendrix, Janis Joplin, Santana and The Who, among many others. The 400,000-person audience sent the message of gathering with the intention of love, peace and good music.

CONTACT US
We offer a free quotation service for marquee and event hire.
Contact us today to discuss your next event.

We're not around right now. But you can send us an email and we'll get back to you, asap. 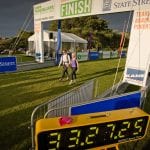